OPERA is Furu’s first 35 mm film. Furu captures the atmosphere from behind the scenes in Norway’s first national opera house as the country holds its breath for the much anticipated opening of its replacement. Her inquisitive and direct focus point is the invisible work of the backstage crew who play out their roles behind the scenes. The film turns the usual hierarchy of opera production up side down and places the backstage staff – the foundation blocks in the pyramid – in front of the camera whilst the director and singers are out of the picture. Furu’s emphasis on social hierarchies draws a parallel towards the building’s history as a part of the Norwegian history of early social democracy. The building was established in 1935 and was conceived as a theatre for the workers and inspired by similar ideas such as the German workers’ theatres, Volksbühne. These theatres aimed to enlighten and instruct the working classes. The construction of the building was part of a national employment strategy for out of work sailors and casual workers between the wars. The film creates a point of refraction between the opera’s pathos and social realism- the backstage crew’s work is aestheticised and elevated- and stands as a contrast to a tradition founded in elitism and bourgeoisie standards. 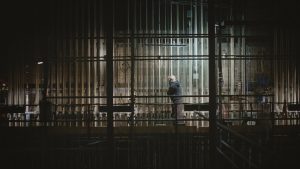